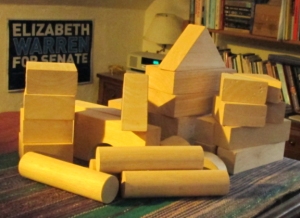 Ever notice how most of the stuff you learn about writing is stuff you already know?

I’m not talking primarily about grammar, punctuation, spelling, and all the nuts-and-bolts basics. I’m talking about the “how to keep going” part.

Last winter the novel I was working on, The Squatters’ Speakeasy, wasn’t coalescing or developing any momentum. I wouldn’t say I was blocked exactly, but the writing sure got sludgy. I procrastinated a lot before I sat down to write, and fidgeted a lot when I got there.

I also started this blog, and wrote an essay about a controversial statue that was in the news at the time. As I blogged back in April, in “Course Correction”:

When I got up in the morning, I couldn’t wait to sit down in my chair and start writing. I finished the essay. I kept going with the blog. Whenever I thought about waking Squatters from its winter snooze, I was overcome by an irresistible urge to play endless games of Spider solitaire.

Procrastination was trying to tell me something. Finally I got the message. I put Squatters aside. About a year before I’d written a scene about a dog named Wolfie, a kid named Glory, and Shannon, a character from my first novel, The Mud of the Place. It didn’t fit in Squatters, so I put it aside. Now I pulled it back onto my lap and had another look. My imagination woke up.

Here comes the bit about how writers keep learning what we already know.

Short version: My other blog, From the Seasonally Occupied Territories, was wilting. Running out of steam. I was thinking of wrapping it up, or at least putting it in the indefinite deep freeze. At the same time, there were so many things I wanted to write about that I was thinking of starting another blog.

Sheesh. When I type that, it looks so obvious. I really must have been nuts or in denial or just plain dense not to see that I could do the writing I wanted to do in From the Seasonally Occupied Territories.

If you’re curious about the longer version, you can read it here.

Writers talk about writer’s blocks and procrastination all the time. Most of us have at least a passing acquaintance with both. Many of us have had long-term relationships with one or the other. We dread them, we hate them, we do endless rituals to keep them at bay.

I’m here to remind you — because I know you know this already — that often the blocks and the procrastination are trying to tell you something. Sometimes the back-seat driver is right: Either you’ve missed a turn or you’ve taken one you didn’t want.

The road you want is the one that keeps your pen moving across the paper or your fingers on the keyboard.

4 thoughts on “Listen to Those Blocks”