I just finished a master proofread, and boy, was it a doozy.

The master proofreader reads proof against copy, line for line, word for word, character for character. It requires intense focus. This is exhausting. 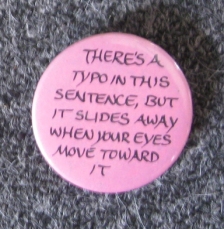 Don’t drive yourself crazy looking for the typo, OK?

In a master proofread, errors fall into two categories: printer’s errors and editor’s alterations. Both are flagged and corrected in the margin with conventional proofreader’s marks. If the compositor didn’t follow the manuscript precisely, the proofreader marks the correction “pe” (printer’s error). When the proofreader catches something that the author, editor, and copyeditor missed, she marks the correction “ea” (editor’s alteration) or something similar.

The distinction is made between printer’s errors and editor’s or author’s alterations because print shops correct their own errors for free. When authors or editors make changes at the proof stage, they generally get charged for them. Some writers have an irresistible desire to fiddle with their prose at the proof stage. Often the desire is somewhat easier to resist if they know it’s going to cost them money.

Fortunately the only person who has to translate this into type is me.

Before the digital age, typewritten manuscripts had to be completely rekeyed by the compositor. Good compositors are uncannily accurate, but when an entire 300-page ms. has to be retyped, errors are inevitable.  (Good compositors often correct obvious typos on the fly, but their only compensation for this is the gratitude of proofreader, editor, and author.)

These days, most mss. are submitted and edited electronically. Each version is “cleaner” — more free of errors — than its predecessor. The manuscript never has to be completely rekeyed, so at least in theory the proofs never have to be read against the edited ms. The proof still has to be read, however, ideally by a fresh set of eyes that have never seen the copy before. This is called “cold” or “blind” reading.

Most of the proofreading I do is cold reading.  (I’ve blogged elsewhere about why I like proofreading.) I never see the edited manuscript, so I don’t know what shape it was in when the copyeditor got it or how the author responded to the copyeditor’s changes. I’m the safety net. I’m supposed to catch whatever wasn’t caught earlier.

I’m also looking for formatting glitches, like weird end-of-line hyphenation (you don’t want “therapist” to break as “the-rapist,” or one-syllable words to break at all), “stacks” (when three or more consecutive lines end with a hyphen), and widows and orphans (these are variously defined, but basically they’re instances where a word or even a whole line winds up on a different page from the rest of its paragraph).

I do very few master proofreads these days. The last one was less than arduous: reading second-pass proofs against first-pass to make sure that all the corrections had been correctly entered and that the changes hadn’t messed up any line or page breaks.

So earlier this winter a publisher’s production editor (PE) asked if I’d be able to take on what clearly wasn’t your typical master proofread. Not only was the copyedit on paper (not common these days), but the author had done extensive rewriting after the copyedit. As the PE described it, it sounded like a compositor’s nightmare: “huge number of inserts in a hard-copy ms., no single file, author’s bordering-on-illegible handwriting.”

The 176 inserts — some of which were several pages long — hadn’t been copyedited, though the very capable PE had read them through and done some markup, along with making sure they were keyed to the manuscript so the compositor could replace old copy with new and keep everything in order. Where the author’s handwritten revisions on the original ms. were almost unintelligible, she’d written out the words so the compositor (and I) could read them.

To make it even more fun, both the PE and the book’s editor had written queries to the author on the ms., so part of my job was to copy these queries onto the proofs so the author can see them. These are marked “CQ,” which as I learned it stands for “carry query.” (Wikipedia notes that it actually stands for cadit quaestio, literally “the question falls,” which in legal writing and in some editorial venues means that the question has been settled. In my editing experience it means the exact opposite: the question hasn’t been answered.)

The first thing I did was lock Perfectionista in a closet where I couldn’t hear her carping. Perfectionista is my inner anti-muse who thinks perfection is a reasonable expectation and if I can’t achieve it I’m worthless. I was going to be simultaneously proofreading, copyediting, and looking out for continuity problems introduced by all the new text. No way was I going to catch everything. Once the proofs were corrected, there would be a second proofreading pass, both a master proofread and a cold read.  On jobs this messy, the safety net needs a safety net.

Blessing the PE for her meticulous work and the copyeditor for her comprehensive style sheet, which made it relatively easy to make all those inserts consistent with the copyedited pages that surrounded them, I made it through. Will the author have to pay for all those changes? I don’t know. The cost of implementing them — time spent by editor, production editor, compositor, and proofreaders — must be running well into the thousands of dollars.

The real moral of the story, dear writers, is this: Do your rewriting before your book goes into production, not after the manuscript has been copyedited.

Here’s what a fairly typical page of the copyedited, rewritten, and worked-over manuscript looked like: