The deadline-frazzled writer is often depicted staring at a blank screen or a blank sheet of paper. From the look in the writer’s eyes and the beads of sweat on the writer’s face, you know he or she is on the verge of panic.

Common advice to blocked or procrastinating writers: Chain yourself to your desk until it’s done.

Ummm — maybe. Writing every day is a really good idea. Chaining yourself to your desk — maybe not.  Staring too long at the computer screen can cause brain freeze. When my brain freezes, so do the characters in my story. So do the thoughts I’m trying to spin into an essay. 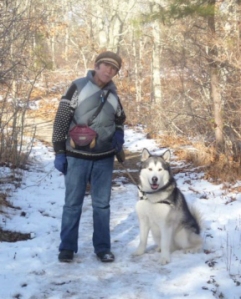 Travvy, my #1 walking buddy, and I take a break on the trail.

Walking is high on my list. I walk a lot. Lately I’ve been walking even more than usual.

My last several weeks have been busy. I’ve got two huge, demanding editing jobs in progress, and I’ve also been looking after an assortment of critters while their owners are away. Usually these gigs only last a few days. In one case it’s three weeks. Weekend before last, the beginning of school vacation, I was looking after two cats, five hens, one rabbit, and four dogs, one of them mine.

My best writing time is first thing in the morning. The good news is that every single day for the last almost-three weeks I’ve managed to get up and write for at least an hour before I’m off to feed the dogs, let the hens out, and check on the cats. On my busiest weekend, three of the dogs could be walked in combination. My Travvy does better solo, and besides, a brisk hour-long walk is part of our routine. The upshot is that he and I don’t get home till a little after 10.

My writerly brain is not idle while I walk. While I’m talking to a dog and noticing changes in the air and landscape, my brain is testing ideas for my essay in progress — this is the one I referred to in “Get Me Rewrite,” about a statue that’s caused controversy at Wellesley College. It’s also playing with the structural challenges of Squatters’ Speakeasy, the novel in progress. When I get home, I scribble down notes that I hope will come in handy next time I sit down at the computer.

Try it. Walk. Knead bread (another favorite activity of mine). Knit. Chop vegetables. Do barn chores. Anything that doesn’t involve staring at the computer screen. We humans have bodies as well as brains. The two are connected. Movement of the body can unfreeze the brain.

Talk to your characters. Listen to them talk to each other, or to themselves. Play with the ideas you’re trying to shape into an essay. They’re talking to you too, the way characters do. Listen to them.