My T-shirt collection probably numbers close to 180 by now, but I’ve stopped swearing that I’ll neither buy nor accept new T-shirts. The newest shirt is pale yellow. It sports a large semicolon on the front and on the back it says: “The semicolon is not used enough; the comma is used too often.” 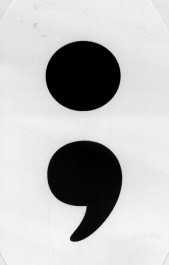 Along with the T-shirt I bought two oval semicolon stickers, one for my car, the other for the semicolon hater in my writers’ group. She accepted hers with grace but promptly drew an international “NO” symbol on it with a red Sharpie.

Anti-semicolonism isn’t rare among writers and even among editors, but I don’t understand it. A writer who favors simple, usually short subject-verb-object sentences will seldom have need of semicolons, but is that any reason to hate them?

I suspect that sometimes anti-semicolonism may be a cover for the fear and loathing of complex sentences: “I hate complex thoughts” sounds rather anti-intellectual, but “I hate semicolons” sounds literarily discerning. To have a strong opinion about semicolons implies that one knows what a semicolon is, and that alone is enough to shut many people up.

As a writer and editor, I love a well-stocked toolkit. Every sentence I encounter, the ones I wrote as well as the ones someone else did, has its own needs. Punctuation marks are tools for shaping sentences, and many sentences can be shaped in different ways. Here’s an example, pulled from an essay of mine: “I’m an editor and writer; without functioning eyes, I can’t work.”

This not especially long or complex sentence could be punctuated in several ways, all of them perfectly correct:

The first is the most matter-of-fact. To my ear it’s the most staccato, and probably the most emphatic. It leaves the reader to connect the two statements in her own way.

In #2, the colon sets up a cause-and-effect relationship between the two parts of the sentence. The colon suggests because or therefore without adding a word.

The em dash in #3 also conveys cause-and-effect, but more expansively — literally: em dashes take up more space than colons or semicolons and push the elements on either side of it further apart. Like the two-sentence option in #1, an em dash lets the reader make her own connections, but it gives her more room to do it in. To get a feel for em dashery, read a few of Emily Dickinson’s poems the way she wrote them and then with “standard” punctuation imposed. (This was done in some early published versions of Dickinson’s work.)

I read most everything I write aloud. Often I read aloud what I’m editing. I highly recommend the practice. When one reads aloud, the punctuation functions like musical notation: it signals pauses, breaks, and phrasing. I read each of the above options a little differently. In this particular sentence, period + new sentence imposed too much separation between the two thoughts. Neither colon nor dash quite worked because I wanted to downplay the cause-and-effect connection — it’s there, of course, but it’s suggested rather than stated.

#4: I’m an editor and writer; without functioning eyes, I can’t work.

Plenty of readers will swear up and down that they read all four sentences exactly the same way and don’t see an iota of difference among them. Some writers will swear likewise. Maybe they’re right, but maybe — at least some of the time — the punctuation works subconsciously.

When I’m reading for pleasure I often don’t notice what punctuation marks the writer has used, or even what word she’s chosen in preference to the various alternatives. When I’m editing, or reviewing, or just rereading to figure out How did she do that? — then I notice. Craft is often self-effacing and invisible to the casual observer, but that doesn’t mean it’s unimportant.

So my toolkit is amply stocked with semicolons, and I keep them near the front where they won’t get lost. If yours drift toward the back, or get buried under commas and dashes and colons, that’s fine with me. But don’t banish them altogether. A writer who eschews semicolons is like a carpenter who doesn’t have a Phillips head screwdriver (several of them!) in her toolbox. Sure, you can often make do with the tools you’ve got, but you can achieve more precision and (dare I say it?) elegance if you’ve got exactly the right tool for the job.

P.S. for semicolon fans: Semicolon T-shirts, mugs, stickers, and tote bag can be had on Cafepress.

8 thoughts on “Praisesong for the Semicolon”