But dashes and ellipses are handy critters. Used with care, they’ll help you shape your writing to say what you want and sound the way you want it to.

First off, what are they?

An ellipse consists of three periods in a row. (In British English, periods are called full stops.) Like this: . . .

There’s a space between the dots, and one at each end. What your word-processing program calls an ellipsis looks like this: … No spaces between the dots. If you want to score brownie points with your editors and your more discerning readers, don’t use this shortcut. Type dot-space-dot-space-dot.

The ellipsis serves an important purpose in academic and other nonfiction: when you’re quoting from another source and you want to abridge the quote, the ellipsis is used to indicate where words have been left out. Say I wanted to quote the second sentence in the second paragraph of this post but not all of it: “Used with care, they’ll help you shape your writing to sound the way you want it to.”

I’d render it thus: “Used with care, they’ll help you shape your writing to . . . sound the way you want it to.” 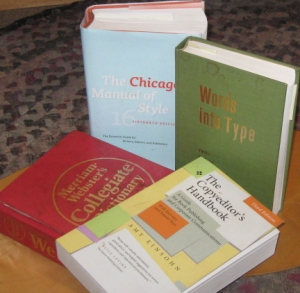 Important resources for learning more about ellipses, dashes, and other stuff

Aside: Leaving words and whole sentences out of quoted material can distort and misrepresent the original author’s intent. Use ellipses with care. For more about this use of the ellipsis, consult your favorite style and grammar handbook.

In fiction and non-scholarly nonfiction, the ellipsis indicates a trailing off. Words are being omitted not because they’re being dropped from a quotation but because they aren’t being said.

Here’s a snippet from my novel in progress. Giles and Shannon are friends. Wolfie and Pixel are dogs. Giles is meeting Wolfie for the first time.

Giles was pointing at Wolfie. “Who, or what, is that?”

“This is Wolfie,” said Shannon. “I told you about Wolfie.”

“You did,” Giles conceded, “but I wasn’t prepared . . .” He fluttered his fingers at Pixel, who was lying in the hallway paying close attention.

Giles doesn’t complete his sentence. He shifts his focus — and the reader’s — from Wolfie to Pixel. The reader doesn’t know what Giles was about to say or why he didn’t say it.

In dialogue the dash, in contrast to the ellipsis, indicates an interruption. Here’s an example from later in the same scene. Giles and Shannon are both artists. They’re looking at a wall mural in Shannon’s house.

With his coffee mug Giles indicated a long line across the middle distance. “What this wall needs,” he pronounced, “is some movement.”

“Thank you, Mr. Picasso,” Shannon said. “You could just stand there and direct traffic —” She stopped short. “Aha!” she said, setting her coffee down and joining Giles at the wall.

Shannon interrupts herself. Dashes can also be used when characters interrupt each other. An interrupted sentence sounds different from one that trails off. It’s like the difference between walking into a door because you didn’t see it and slowing down before you get there.

Dashes have other uses too. Like commas and parentheses, they often come in pairs. Note my sentence above:

He shifts his focus — and the reader’s — from Wolfie to Pixel.

The dashes could be replaced by either commas or parentheses:

He shifts his focus,  and the reader’s, from Wolfie to Pixel.

He shifts his focus (and the reader’s) from Wolfie to Pixel.

Or the punctuation could be dropped altogether:

He shifts his focus and the reader’s from Wolfie to Pixel.

I chose dashes on the fly because I heard “and the reader’s” as a very slight detour, a stepping-back from the sentence before following it to the end. If I revise the sentence (which I probably won’t — this is a blog after all!), I might consider the alternatives. Set off by commas, “and the reader’s” is more fully integrated into the sentence, but not as fully as it would be with no punctuation at all.

Set off by parentheses, it becomes an afterthought, as in “Why include it at all?” When I put something in parens, it’s often because I have a sneaking suspicion it doesn’t need to be there but I can’t bear to delete it. The parens are there till I muster the nerve to yank it out.

Now take another look at the paragraph just before the preceding one. There’s a sentence in there that includes a dash and an exclamation point and parentheses all bundled up together. Am I going to warn you “Don’t do this at home”? I am not. I’m going to say “Try it. See if it works. If it doesn’t, try something else.”