I’m taking a hint from one of my favorite bloggers, Evelyne Holingue. She’s a native French speaker who now lives in the U.S. During the month of April she went through the alphabet A to Z. For each letter, she chose a French idiom then gave its literal meaning, its idiomatic meaning, and its nearest English equivalent. It was great fun — playing with language always is! — and (dare I say it) educational.

I loved the idea of doing some kind of series. Not about idioms but about — what?

Over the years I’ve been compiling observations about writing and editing. I call them Sturgis’s Laws. Not “rules.” No way. We’ve got enough rules already. There are 17 so far, plus one unnumbered law that isn’t really a law at all — I’ll save that one for last.

So here begins an occasional series with, of course, Sturgis’s Law #1:

If you stare at any sentence long enough, it will look wrong.

Sturgis’s Law #1 has an obvious corollary. Call it Law #1a:

If you stare at any word long enough, it will look wrong.

In the editors’ forums I frequent, editors often post sentences we’re having problems with. Is this construction OK? we ask. Would you use this word in American English (AmE) or is it mostly British? Is a comma enough here, or should it be a dash? What the hell does this sentence mean?

And so on. Usually the question is answered pretty quickly, but the editorial tribe rarely stops there. We rip the sentence apart, rearrange the words, change the punctuation, and come up with clever ways of misreading a phrase that was perfectly clear at first glance.

If only more sentences were this tasty . . .

We’re a pack of vultures or a dog with a bone — take your pick. I’m partial to the dog-and-bone metaphor myself.

The editor who posted the query, if s/he is wise, has long since moved on, leaving the rest of us to our gnawing.

There’s much to be learned from these gnaw-fests, but at some point Sturgis’s Law #1 comes into play. If you stare at any sentence long enough, it will look wrong — and the longer you stare at it, the more things you’ll find to fiddle with.

Hesitate too long at one sentence or one word and you’ll never finish the job.

How many sentences in the typical short story, academic paper, or full-length book? How many words? How long does the typical reader linger over a typical sentence, a typical word?

Moral of story: Don’t linger too long over this sentence or that word. As the poet said, “the Moving Finger writes; and, having writ / Moves on.” 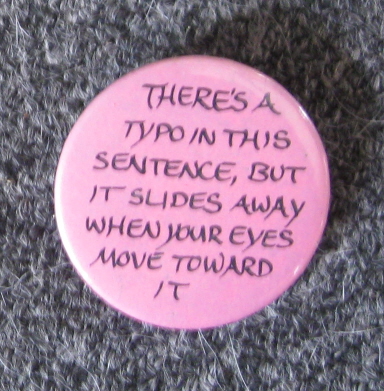