My library’s annual monster book sale was last weekend. Of course I went. Of course I came home with a stack of books, and all for $10. 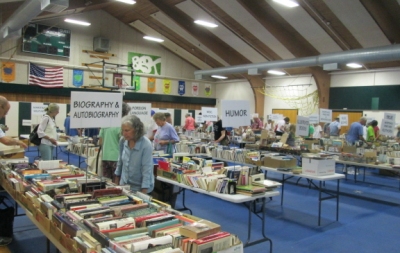 The book sale takes place in the elementary school gym. All the sorting and shelving is done by volunteers.

The book sale is a browser’s heaven: tables and tables of books sorted, and occasionally mis-sorted, into general categories, and many with more books in the boxes underneath. I rarely go with a particular book in mind. I always find books I didn’t know I was looking for.

Or they find me.

Browsers cheerfully recommend books to total strangers, and sometimes get into spirited conversations about books they liked or books they thought were overrated. I was poring over one of the history-related tables, head cocked sideways so I could read the spines, when the fellow to my right handed a book to the fellow on my left. The book passing in front of me was The Chicago Manual of Style.

I’ve been on first-name terms with Chicago since 1979, when it was still called A Manual of Style. Could I remain silent while my old buddy and sometime nemesis changed hands right before my eyes? I could not. “That’s the current edition,” I said. “I’ve got it at home. I’m an editor by trade.”

Dad let on that Son was an aspiring writer. Son seemed a little uneasy with the description. “If you have any interest in mainstream publishing,” I said, “that’s a very  good book to have.”

I don’t know whether they bought it or not, or what they paid for it. It was half-price day at the book sale, so probably not more than a buck or two. But if you have any interest in mainstream publishing, especially in the U.S., it is a very good book to have. Or you can subscribe to the online edition for $35 a year.

In U.S. trade and academic publishing, The Chicago Manual of Style is something of a bible. It contains almost everything writers and editors need to know about book publishing, along with extensive recommendations for further reading in various areas. It includes chapters on grammar, usage, and punctuation. At least half of its 1,026 pages are devoted — as its title might suggest — to style.

What is “style”? Think of all the myriad choices you make when you’re writing and especially when you’re editing your own work, about capitalization and hyphenation, about the use of quotation marks, boldface, and italics. How to treat titles of movies or titles of songs, and words from other languages, and the English translations of those words. And on and on and on. Style comprises all the decisions made about how to handle these things. “Chicago style” is a collection of particular recommendations. If you italicize book titles and put song titles in quotes, you’re following Chicago style, maybe without knowing it.

Much of the nit-pickery that goes into copyediting is about style. Confronted with the plethora of details that go into Chicago style, or Associated Press (AP) style (widely used by newspapers and periodicals), or American Psychological Association (APA) style (widely used in academic writing, especially the social sciences), the novice writer or editor may find it hard to believe that applying a particular style makes things easier — but it does. Every time I embark on editing a long bibliography, I am profoundly grateful to Chicago for its documentation style and to the authors who apply it consistently. I would hate to have to learn or invent a new documentation style for every bibliography I work on.

That goes for other aspects of style too. Following a style guide in effect automates the minute details and frees your mind to deal with the more interesting stuff like word choice and sentence structure and transitions between paragraphs.

The Chicago Manual of Style came into existence early in the 20th century as the style guide for the University of Chicago Press. Then as now, the press specialized in scholarly works, and the early editions of its style guide reflected that. Now it’s widely used by trade publishers, independent publishers, and self-publishers as well as academic presses.

What this means in practice is that not all of its recommendations are well suited to every type of book, and the further one gets from scholarly nonfiction — say, into the realms of fiction and memoir — the more cause one is likely to have for ignoring some recommendations and improvising on others. This is fine with Chicago‘s compilers but not so fine with some copyeditors, who treat the book’s style recommendations as Rules That Must Be Obeyed.

I think of them as Conventions That Should Be Respected, and Generally Followed in the Absence of a Sensible Alternative. I also advise serious writers to introduce themselves to Chicago style and even get to know it. Automate the petty details and you can focus your attention on the big stuff. You’re also more likely to win an argument with a stubborn copyeditor.