Once upon a time I copyedited a novel set in 19th-century New England that had cranberries being shipped to market in May.

I grew up in Massachusetts and have lived here most of my life. When fresh cranberries reach the market in early to mid fall, I stock my freezer with them because they aren’t available earlier in the year. That’s true in the 21st century, it was true in the late 20th (which was when I copyedited this novel), and it was surely true in the 19th, when transportation, storage, and other technologies were a good deal less sophisticated than they are today.

That’s known in the trade as a “good catch”: I caught something that the author, the book’s editor, and everyone who had already read the manuscript missed. Copyeditors are always catching things that everyone else missed, but this was an especially good one. That’s why I remember it more than 15 years later. (Tellingly, I can’t for the life of me remember the title of the novel or the name of its author.)

We copyeditors quite justifiably pat ourselves on the back for these catches and crow about the best ones to our colleagues.

Readers crow about them too when they find what they consider a glaring error in a published book. “Where was the copyeditor?” they cry. “Where was the proofreader?” This is often followed by a lament about how publishing, the English language, and/or western civilization is going to hell in a handbasket.

Well, if there are several glaring errors in a book, coupled with infelicities of spelling, usage, and style, it may be that it wasn’t properly copyedited or proofread at all. But errors do crop up in even the most conscientiously written, edited, and proofread works. The overwhelming majority of them, thank heavens, are minor.

Think of how many factual details go into any book-length work, fiction or nonfiction. Pity the poor author, who must focus on the whole forest while remaining acutely aware of each tree in the forest, each branch on each tree, each twig on each branch, each bud on each twig. Say you’re an expert in a particular sort of bud. Chances are good that you’ll eventually catch the author out — “No, no, no! Those buds never appear before May in the Upper Midwest!” — but chances are even better that most readers won’t notice. It won’t, and shouldn’t, undermine the credibility of the work.

Unless, of course, the work is about trees in the Upper Midwest. Then you may have a case. 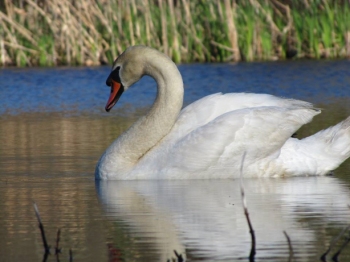 There’s a lot more to Martha’s Vineyard than swans on the Mill Pond, but we’ve got that too.

I live on Martha’s Vineyard, a place that is so often misrepresented in both fiction and nonfiction that much of my own writing is devoted to countering those misrepresentations. At the same time, I know that some errors are more significant than others. I don’t care (too much) if someone has a ferry sailing from Vineyard Haven at 5:15 instead of 5:00. Recently, though, I reviewed a book that got some of the geography wrong and misspelled several names that could have been verified without much trouble. Editor fail, I thought.

I do get really, really angry when someone assumes that what they’ve seen on the news is the whole truth and nothing but; that everyone here is wealthy when our median income is one of the state’s lowest.

“Write what you know” is a truism quoted ad nauseam, but I don’t mind it when it’s accompanied by its obvious corollary: “And if you don’t know it now, do your research.”

This is why I was so impressed when I was contacted a couple of months ago by a writer whose novel in progress was partly set on the Vineyard. Could he ask me a few questions? Ask away, said I.

His questions were the sort that would only be asked by someone who had at least a passing acquaintance with the place. The larger world wouldn’t notice if he got these things wrong, but many Vineyarders would. I was thrilled to be asked and impressed that he cared enough to get it right. I answered as thoughtfully as I could. (Note to anyone who’s writing about Martha’s Vineyard: Contact me. I’m not kidding. If I can’t answer your questions, I can probably put you in touch with someone who can.)

This has inspired me. If I didn’t mind answering this writer’s questions — hell, no! I’m glad to be asked! — other people won’t mind answering mine. I’m not going to get all the details right, and even if I do, some people are going to disagree with me. But if I get out there and ask the questions, I’m probably going to meet some cool people and get into interesting conversations.

2 thoughts on “Those Pesky Details”