My handwriting sucks. Here’s a sample:

This is why I do nearly all my first-drafting in longhand: because I can’t read my own writing unless I slow way down and focus on each word.

It took me a while to figure out why I’d sometimes get so blocked — paralyzed! — when I did nearly all my writing on the computer. Maybe it’s because I’m an editor as well as a writer, or maybe it’s because I’m a recovering perfectionist who has occasional slips, but sometimes I’d stare at those crystal-clear words on the screen and think, No, that’s not right, and then get stuck trying to fix it instead of moving on.

Eventually I figured out that the best way to break through these blocks was to grab a pad of paper and a pen and get away from the computer. At the top of the paper I’d writing something like “I can’t write this scene because . . .”

And out would flow whatever I needed to know, and eventually the scene itself.

This was also a handy way of getting to know characters better. Whatever I wrote in longhand on a yellow pad wasn’t part of The Manuscript. I loosened up. No pressure. I could write anything I wanted.

So why wait till I got stuck to bring out the pen and paper? Why not start out that way?

I tried it. It worked. It’s still working. I do most of my first-drafting in longhand.

Pretty soon, however, the scrawl of a ballpoint pen across lined yellow paper was looking rather dull. I started acquiring fountain pens and bottles of different colored ink. I’ve currently got about a dozen of each. It’s a little ridiculous, but I couldn’t live without them.

The bonus is that ink blottings on paper towels are really pretty. I use them as coasters for my tea mugs and my beer steins. They make me happy. 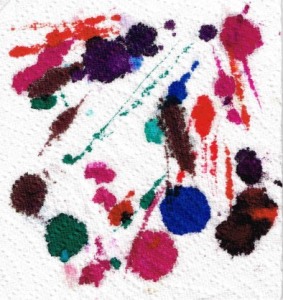 6 thoughts on “H Is for Handwriting”