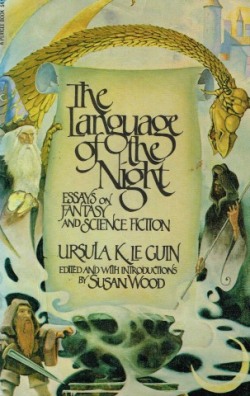 That’s Ursula K. Le Guin in “Talking About Writing” which you can find in her Language of the Night: Essays on Fantasy and Science Fiction (1979). I don’t write fantasy, but I’ve read a lot of it, which may explain why fantasy elements keep sneaking into my real-time fiction.

It may also explain why for me writing is a journey, especially writing fiction, and everything Le Guin says about fantasy applies. The journey I’ve been on for three years now started with a dog running through the woods and a girl sitting on a playground swing. As I wrote my way toward them, I began to understand who they were and how they were connected.

I also ventured deep and deeper into my own subconscious, or memory, or imagination, whatever it is, and found images and questions that preoccupied me in the past but that I’d set aside. Rescue — both rescuing and being rescued — was a big one. In my novel in progress, the rescue of the dog turned out to be pretty easy. The rescue of the girl is still working itself out. I’m still not 100% sure of what she needs to be rescued from, but it’s a lot clearer — and more unsettling — than it was when I started. So are the stories and motivations of the would-be rescuers.

One of my mantras is “Your writing will teach you what you need to know.” It will, but the catch is that you have to keep doing it. My hunch is that a fair amount of what’s called “writer’s block” stems from the cautious mind’s fear of those subconscious places where reason has to relinquish control. The fear is totally justified because, as Le Guin wrote, the journey will change you.

It may change you in ways you don’t expect and can’t control, that may sharpen or blur your vision enough to unsettle your view of the world. It’s a wild magic, writing.

As the letter J drew closer in my passage through the alphabet, I couldn’t decide between “journey” and “journal.” The two words had to be closely related, I thought, and so they are: both stem from the Latin word for “day,” diurnis, by way of the Anglo-French. If you know any French, or even if you don’t, the “jour-” in “journey” and “journal” probably suggests jour, the French word for “day.”

“Journey,” it seems, originally suggested a day’s travel. Now a journey can take much longer, especially if you’re working on a book-length work, but breaking it down into days isn’t a bad idea. The journey may indeed lead into dangerous places, but the closer you get, the less scary they seem — because you’re getting braver with every step you take, every word you write.