Like many other word people, the cataclysmic 2016 U.S. presidential election campaign and its ongoing aftermath got me wondering whether my particular skills as a writer and editor could be useful and, if so, how. Clarity and accuracy seemed way down low on the country’s priority list.

Then in late January, I found Theodora Goss’s blog post “The Politics of Narrative Patterns.” It began like this:

There are all sorts of reasons the American election went the way it did, but I think one of them, and perhaps quite an important one, was the way in which our thinking is determined by narrative patterns. What do I mean by narrative patterns? I mean that in narratives, in stories, there are underlying patterns we are familiar with. They recur from story to story: stories are often variations on these patterns. When we encounter these patterns, we feel fulfilled, comfortable — we recognize them, we like to read about them. We like variation, but only a certain amount of variation. Too much variation makes us feel unsatisfied, as though somehow the story is written “wrong.”

After discussing some narrative patterns popular in our culture, Goss notes that male characters have more archetypal options than female characters. Right, thought I, thinking of the path-breaking work writers of f/sf (fantasy and science fiction, hands-down my #1 go-to choice for fiction) have been doing since the 1970s and earlier to expand the possibilities for female characters.

Then Goss ties this to presidential elections, past and present. “People did not get so excited by Barack Obama, when he first ran, because of his policies,” she writes. “No, he was the young hero who had overcome adversity and triumphed.”

And Donald Trump? “He fit another narrative pattern: the stranger who rides into town and imposes order, bringing justice to the frontier. . . . It did not hurt him that he was not morally pure, because we do not expect the gunslinger to be morally pure — no, that’s reserved for heroes.”

Immediately it dawned on me that the wise old man in the race, the Gandalf, Obi-Wan Kenobi, and maybe Walter Cronkite character, was clearly Bernie Sanders. Wise old(er) men have loomed large in my fantasy life since I was a kid, but I never “felt the Bern.” The more I researched his record, the less impressed I was. But I had such a hard time conveying my reservations to my many, many Sanders-supporting friends that I finally stopped trying.

When a narrative pattern takes hold, facts take a back seat. This applies to writing as well as politics: novels that capture the public imagination and become runaway best-sellers seldom do it on their literary merits alone. Don’t tell me the gatekeepers of the publishing world, the agents, editors, publishers, reviewers, et al., are impervious to the power of narrative patterns!

What about women? asks Theodora Goss. Plucky girls are OK, but what happens when they grow up? “We only have two patterns for older women who want political power. One is the Virgin Queen, like Elizabeth I: a woman is fit to wield power if she is willing to give up other aspects of being a woman, such as marital relationships or children.”

Hillary Rodham Clinton didn’t  fit this pattern. “What was left?” Goss asks. “The Wicked Queen. We know what she does — she seizes power (illegitimately) for her own gain, to satisfy her own ambition. She kills people or has them killed (this too was a criticism lodged against Clinton). And the Wicked Queen cannot be allowed to gain power — she must be defeated. All of our stories have told us that, from childhood on.”

Walk around that for a while. It resonates.

It also brings me round to the question of what can we word people do in this world where it seems our skills are only valued if we put them in the service of spin, obfuscation, manipulation, and outright lying.

It brought Theodora Goss around to a similar place. At first she thought (feared?) that writing had no use and maybe she should have gone into another line of work. “But now I think that one of our most important tasks is telling stories, and I am a storyteller. I am a perpetuator and creator of narrative patterns. That means I have an obligation to be aware of the patterns, to wield them in ways that are good, and true, and useful. And I can create new patterns.”

That’s the key: the old patterns won’t lose their power with the wave of a pen, but they can be undermined and transformed, and new patterns can be created. I saw it happening in f/sf, where women went from being add-ons and sidekicks to having their own adventures.

Well into the 1960s, lesbian characters in pulp fiction had basically two options: go straight or die. Cracks began to appear in the pattern before the end of the ’50s, and over the following decades, thanks in large part to lesbian and feminist writers, presses, and readers, new patterns were created. In many quarters these days “go straight or die” is an anachronism. 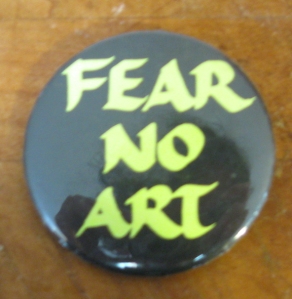 Note my inclusion of “readers” here. The culture’s narrative patterns are very strong, and the gatekeepers, often citing “market forces,” have a vested interest in perpetuating them. Books that break or undermine the dominant patterns are unsettling, and plenty of people don’t like being unsettled. It wasn’t a commercial press that broke the back of the “go straight or die” lesbian stereotype: it was Daughters., Inc., the small lesbian press that in 1973 published Rita Mae Brown’s Rubyfruit Jungle. The novel’s “underground” popularity caught the attention of mainstream publishers, and Rubyfruit Jungle went on to become a mass-market best-seller — and a cultural icon for a lot of us.

Narrative patterns are deeply rooted in all our heads. They’re our default settings when we read, when we write, when we choose among political candidates. They’re powerful for sure, but they aren’t invincible. Words, our words, can change them, one story at a time.

5 thoughts on “N Is for Narrative”