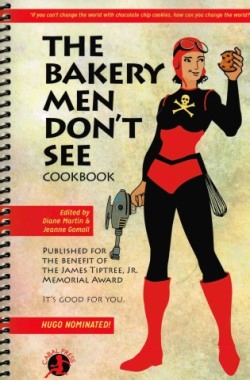 A cookbook I’ve got a recipe in was reprinted last year.

To realize how improbable this statement is, you have to know that I am so not a cook. My mother wasn’t a cook. Neither of my grandmothers were cooks. Somehow I managed to get by on fast food; easy stuff like hamburgers, scrambled eggs, and canned soup; and the kindness of roommates until I moved to Martha’s Vineyard in 1985.

On Martha’s Vineyard there were (and are) no fast-food joints, I lived alone, and the disconnect between restaurant prices and my income made even takeout a non-option except on special occasions (or when someone else was paying). So I taught myself to cook stuff that I like to eat, in quantities such that I can reheat meal-size portions and call it fast food.

I am, however, and have been since the winter of 1975–76, a baker, primarily of bread. So my inclusion in The Bakery Men Don’t See maybe isn’t so surprising? Thing is, my inclusion has less to do with the excellence of my breads (which are pretty good) than with my luck at being, for once in my life, in the right place at the right time.

The time was March 1991; the place was on the fringes of Madison, Wisconsin, specifically WisCon 15, the feminist science fiction convention. I discovered WisCon, and f/sf cons in general while promoting my three women’s f/sf anthologies, which came out from Crossing Press in 1989 (Memories & Visions), 1990 (The Women Who Walk Through Fire), and 1991 (Tales of Magic Realism by Women: Dreams in a Minor Key). Pat Murphy and Pamela Sargent were the guests of honor at WisCon 15.

At the end of her GoH speech, Pat announced the creation of the James Tiptree, Jr. Memorial Award.

And so I would like to announce the creation of the James Tiptree, Jr. Memorial Award, to be presented annually to a fictional work that explores and expands the roles of women and men. We’re still in the planning stages, but we plan to appoint a panel of five judges and we plan to finance the award — and this is another stroke of genius on Karen’s [co-conspirator Karen Joy Fowler] part — through bake sakes. (If you want to volunteer to run a bake sale, talk to me after the speech.)

My copy of the first edition, liberally grease-stained from 25+ years of use.

No sooner had Pat finished speaking than the James Tiptree, Jr. Memorial Award began to take shape, thanks to the astonishing creative energy of the WisCon crew. It was indeed financed by bake sales — and eventually also by uproariously funny auctions, T-shirt sales, two cookbooks, and other means. Within a few months The Bakery Men Don’t See had been compiled and published. (Its title riffs on Tiptree’s probably best-known story, “The Women Men Don’t See.”) It was even nominated for a Hugo!

The Tiptree Award survived and thrived. So did WisCon, which before long had moved into the Concourse in downtown Madison on Memorial Day weekend, which is where and when you will find it today. And so did feminist f/sf — the work being published these days is daunting in its quality and quantity, but if you’re looking for a place to start, you can’t do better than the winners and honor lists for previous Tiptree Awards.

The spiffy design and production values of the new edition of The Bakery Men Don’t See reflect this growth and vitality. It includes the original introductions by co-editors Diane Martin and Jeanne Gomoll (if you know WisCon, you’ll recognize both names) and the GoH speeches by Pamela Sargent and Pat Murphy. It all holds up well, and none of it feels as dated as one might wish.

I’m not about to retire my first edition, however. Its grease stains testify to how well-used it is, plus it contains the contributors’ signatures I collected, high-school-yearbook style, at WisCon 16 in 1992.

On the other hand — flipping through the pristine new edition, I keep noticing recipes I’ve never tried and had almost forgotten, and rereading the stories that go with them. My family has no culinary tradition worth writing about, but other contributors have wonderful stories to tell about where their recipes came from.

The Bakery Men Don’t See is available for $12 from Lulu.com, as is other cool Tiptree-related stuff. Bakery‘s equally wonderful sequel, Her Smoke Rose Up from Supper, covers — you guessed it — entrées and other kinds of food you’re likely to eat before dessert. Unless, of course, you observe one of the Tiptree Award’s mottos: “Life is uncertain — eat dessert first.” I’m in that one too. It’s available in its original edition for $10 from the Tiptree Award store.