“The devil’s in the details” — or is it God that’s in the details? God and the devil are always mixing themselves up, but that’s a post for another time, another blog. What matters is that details are important.

For writers, they’re crucial. Whether you write fiction or nonfiction, poetry or plays, details help bring your stories to life. (They can also weigh your story down. We can talk about that some other time.)

Where do details come from? They’re all around you. All you have to do is pay attention. 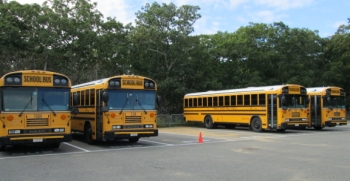 Four buses in waiting at the West Tisbury School

I was reminded of this yesterday when I posted “Little Changes” to my other blog, From the Seasonally Occupied Territories. On our walks, my dog and I often follow a trail that skirts the school bus parking lot at the nearby elementary school. Last year four buses parked there. They went away for the summer, but when school resumed earlier this month, there were again four buses in the parking lot. 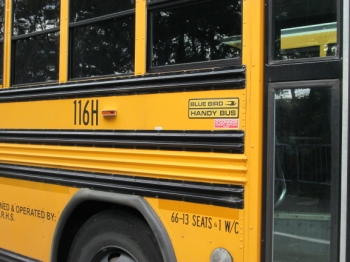 Finally I got curious about the H. What made 116H and 117H different from their buddies? This wasn’t obvious from a distance either, so I looked more closely.

116H seats fewer kids than the non-H buses — because it leaves room for a wheelchair and has a wheelchair entrance at the back. The H, it seems, stands for “Handy Bus” (so it says on the side of the bus), and “Handy” is probably shorthand for “handicap access.”

Back in the Pleistocene, the school buses in my town weren’t accessible by wheelchair. By noticing the details, I learned something about school buses. Will this ever come up in my writing? (Other than this blog, I mean.) Probably not, but who knows? If I ever write a murder mystery, maybe a school bus will have been seen at the scene of the future crime. Maybe some alert soul will have noticed the number. 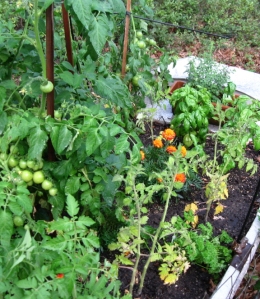 Too much detail can obscure the main point.

Details often sprout into images, similes, and metaphors. Images, similes, and metaphors aren’t scary when they grow organically from your own experience. If you mess around in a garden, for instance, your mind is almost certainly linking what your eyes see, your hands feel, and your nose smells to other things in your life. When I look at my little garden, sometimes I think about making pesto or eating cherry tomatoes, but other times I think, What a mess! I can’t see what’s going on here.

Which is what I sometimes think when I’m revising and come to a passage that’s drowning in detail. Pruning is good, both for prose and for shrubs.

I often think in generalities and abstractions, but when I describe my thoughts to someone else, I almost always reach for concrete images to illustrate them. No surprise there: most useful generalizations are firmly grounded in specifics. In the spring of 1970, I was a freshman at Georgetown University in Washington, D.C. Here’s a story from that time, as recounted several decades later:

Lauinger Library opened toward the end of my freshman year, about a month before the Kent State shootings shut the campus down. Within a very few weeks footpaths had appeared across the green lawn fronting the library, one leading from the main gate, the other from the corner of Healy Hall where foot traffic from several dorms and classroom buildings converged. Imagine a terrestrial ice cream cone, with the traffic circle standing in for one scoop of your favorite flavor and the tip at the library’s front door. While war raged in Southeast Asia and anti-war movements fought it across the United States and around the world, university officials battled the entire student body over the right way to walk to the library. The officials contended that we should follow the existing asphalt walkway around the perimeter of the lawn. Our footsteps, in their hundreds, then thousands and tens of thousands, countered that the shortest distance between two points was a straight line.

Our footsteps carried the day. Officialdom conceded, and the foot-beaten paths were enshrined in asphalt.

“The shortest distance between two points is a straight line”: Well, duh — everybody knows that. But the truism doesn’t stick in my mind the way that story has all these years. It taught me to pay attention to something that just about all of us tend to forget: footsteps matter.

Footsteps, come to think of it, are like details. Pay attention to them. They’re important.