If a tree falls in a forest and no one hears it, did it make a sound?

I think it did. I also suspect that when we repeat the question, we’re not just talking about trees. Trees don’t care if they make a sound. They’re going to fall, and rustle, and crack, whether we hear them or not.

For me, writing is part of a conversation. I do want people to hear the rustling and cracking of my words, and more than that: I want to hear what they have to say in response. I’ve had three one-act plays produced, and I love giving readings. Nothing beats the thrill of seeing and hearing people respond to my words.

It’s a rare audience that will sit still for a book-length work, but I’m lucky: I’ve experienced what has to be the next-best thing. Last Wednesday and the Wednesday before, I got to sit down and talk with a group of women all of whom had read my novel, The Mud of the Place, and were interested in what I was writing about, the lives of year-round residents in a seasonal resort. 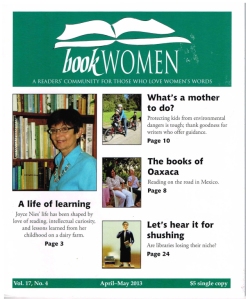 These women, who came from all around the U.S. and Canada too, were participants in Books Afoot, also known as Reading on the Road, a program of the Minnesota Women’s Press. As organizer Mollie Hoben described it in an email, “The basic idea is that reading and travel make a rewarding combination. We pick a destination, learn about women writers from that place (which always involves exciting discoveries), select books to read beforehand, then travel there with interested reader-travelers for exploration and book discussion. Participants come from all over the country.”

I first learned about Books Afoot a year and a half ago, when Mollie contacted me out of the blue. Three Books Afoot groups would be coming to Martha’s Vineyard in the fall, and my novel was one of the four “required reading” books. Would I be willing to meet with any or (ideally) all of the groups?

One of the 2013 Books Afoot groups, meeting in the outdoor café at a local bookstore

Would I?? This was a fantasy come true, and the reality surpassed my wildest expectations. (I blogged about it here.) I’d pretty much decided that writing a second novel was a waste of time. These women changed my mind.

This year we were joined by my writer friend Shirley Mayhew, whose wonderful Looking Back: My Long Life on Martha’s Vineyard came out early this summer — too late for the travelers to have read it before they got here, but plenty of them bought a copy to take home with them. Shirley moved here as a young bride in 1947; I arrived solo in 1985. Our books and our very different but overlapping experiences became gateways for the visitors to enter a place that many people know about but few actually know.

Last month I concluded a blog post, “Who Do You Write For?,” with this description of the kind of reader I’d like to be: “one who’s brave enough to venture into unfamiliar territory as long as she trusts her guide, and one who appreciates the effort that goes into the writing.”

When a book goes out into the world, does it make a sound? If it does, will I hear it through all the cacophonous competition? Having sat down and talked with dozens of such adventurous readers, I know you’re out there. I’m writing for you. 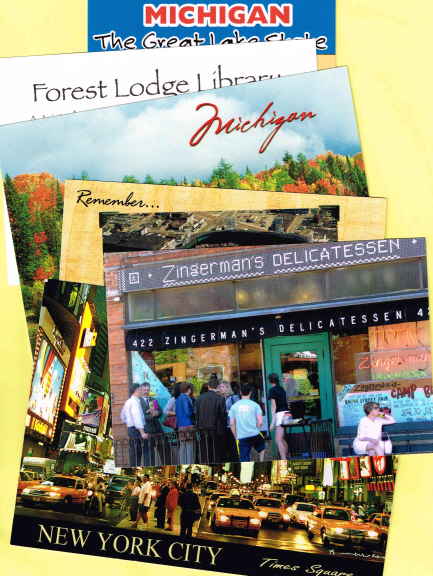 The 2014 Books Afoot women each picked a postcard from wherever they were from and wrote a favorite book recommendation or two on the back. Here are a few of them.

3 thoughts on “In Praise of Readers”