These days the how-to-write gurus like to divide writers into planners and pantsers. Planners, it’s said, outline everything in advance, then stick to the outline. Pantsers fly by the seat of their pants. They don’t know how the story is going to end until they get there. They make it up as they go along.

Either/or doesn’t work for me. Meticulous outlines make sense for some, but for me they suck the point out of writing. Writing is a journey of discovery. If I know in advance what I’m going to discover, why make the trip? I’m just a sightseer gazing through the windows of a tour bus.

Nevertheless, a story needs forward motion. To maintain forward motion, some sort of structure is required; otherwise you’ve got waves breaking on the shoreline, getting no higher than the high-water mark before they fall back, momentum spent. Last year I set a project aside because it had a surfeit of subplots, characters galore — and no forward motion whatsoever. I kept waiting for something to happen, but nothing did. What it lacked was structure.

Think of structure as the frame of a building or a road through previously untracked wilderness. Either way, your job is to build it. My first novel, The Mud of the Place, started with a character and a problem. I wrote it scene by scene. But though I never made an outline, I scribbled notes here there and everywhere. Years after I finished the final draft, I was still finding yellow pads with notes on them: notes about characters, notes about plot, notes about how I didn’t know what the hell I was doing.

I’m doing the same thing with Wolfie, the novel in progress. Ideas and insights and solutions to plot problems often come to me while I’m walking or kneading bread or falling asleep, but to really explore and develop them I have to keep my hand moving across the page. This time I’m keeping the notes in one place, and in chronological order. When I’m stuck or drifting or just need a jump start, I dip back into them. My old ideas keep giving me new ideas.

Here’s a sample of what they look like and what I use them for.

In early November I was trying to corral some emerging themes, subplots, and images. I was auditioning names for one character (Javier? Rafael? Rafe? Ralph?) and social media handles for another (for the moment she’s settled on Quinta Wolf). Note also the ink scribbles at the top and the liquid splotch (probably tea, maybe beer) at right. The red notes were added later.

Here the author is trying to figure out what the hell happens next. She does this a lot.

Toward the bottom of the same page, the pen offers an answer — and starts speculating about a possible plot development further down the road. I haven’t got there yet, so I don’t know how it’s going to play out. Note the scribbles. Note taking often involves scribbles.

By late February, I had started draft 2, even though I hadn’t finished draft 1. My main plot threads were clear and becoming clearer. I had to build them a trellis to climb on. On March 24, I listed the characters driving each of the threads. “The Wall” is a mural that protagonist Shannon is painting on her living room wall. It has, as these supposedly inanimate objects sometimes do, taken on a life of its own. Amira wandered in from the set-aside novel, where she plays a major role. Her role in Wolfie isn’t settled yet, but it’s definitely important.

At the bottom of the page I’m brainstorming names for my villain. He started off as Bruce McManus, which didn’t feel right. “Bruce” has stuck, but “McManus” is gone. I didn’t want a name with obvious ethnic associations. I did want a name that suggested that what this guy does, though terrible, can be and often is done by ordinary, unexceptional men. His surname is now Smith. 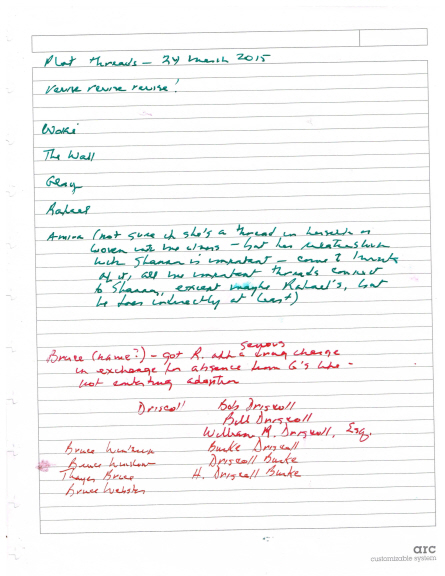 Here — not even three weeks ago! — I’m looking ahead to what follows a key scene (“selectmen’s meeting”). The scene itself is being lifted wholesale from draft 1, but when I first wrote it I hadn’t thought much about what its repercussions and aftershocks might look like. I’m also working out some character motivation: “Why is Shannon getting uneasy?” She is uneasy, and with good reason, but neither she nor I are quite sure why. The tricky thing is that it can’t be too obvious. One of the questions that’s driving this novel for me is “What do you do when you suspect something is very wrong, but you can’t be sure and the stakes are too high to allow for mistakes?” The jury’s still out on that one. 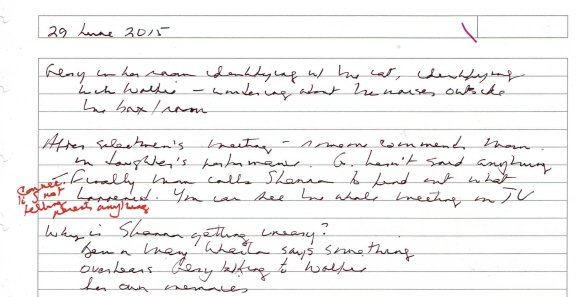 And finally, here’s the sketch for a plot break-through scene. Bruce, an outwardly rational lawyer who weighs the consequences of (almost) everything he contemplates doing, has to make a move that isn’t all that well thought out. He has to be, in other words, on the brink of panic. What would do it? Well, if he realized that Shannon, whom his 11-year-old stepdaughter, Glory, idolizes, knows Amira, who counseled Glory four years earlier when she was in trouble at school, that would do it. How to bring that about? I mulled that over on several walks, then a possibility popped into my head. On July 8, I sketched it out and decided, Yeah, that’ll work. Let’s try it.