I was thinking “D is for Dictionary,” but I’m in deadline hell at the moment so Deadline won. 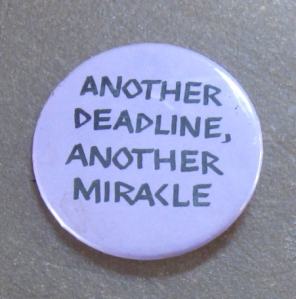 Most editors and writers have mixed feelings about deadlines. We love them when we’ve met them, not least because if this is a paid gig  the check will shortly be in the mail or payment will land in our bank account.

Until then, however, deadlines are swords of Damocles hanging over our heads and dominating our thoughts even when we’re not supposed to be thinking about work.

I’m never more focused than when I’m on deadline. Deadlines make it easier to set priorities: “No, I can’t drop everything and go to lunch. This has to be done by tomorrow.”

Deadlines also make it easier to get out of stuff you don’t want to do anyway. It’s so much easier to say “Sorry, I can’t — deadlines!” than “No, I really don’t want to sit through another three-hour meeting where nothing gets done.” (I hope I didn’t blow my, or your, cover with that one.)

My years working for a weekly newspaper taught me a lot about deadlines. Web-based publications may have rolling deadlines, but print is less flexible. During much of my time at the paper it was not flexible at all: “the boards” from which the paper was printed had to be on a certain boat or a certain plane to make their rendezvous with the printer’s representative on the other side of Vineyard Sound. (Living on an island does complicate things somewhat.) The adrenaline surge on Wednesday afternoon was exhilarating, especially if a story broke late: the reporter might be typing furiously at 3 p.m. while Production rearranged pages to make room for new copy. 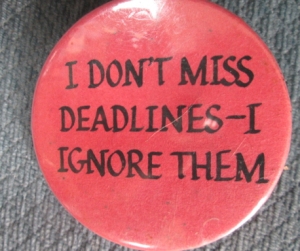 As an editor, I learned just how annoying it can be when writers blow off deadlines without advance warning, or turn in copy that’s longer, shorter, or sloppier than expected.

Being a fairly slow writer, I learned to appreciate my colleague whose copy might be sloppy but who could crank out anything if it was needed to fill a gap, maybe because an ad was cancelled or a story pulled or another writer didn’t make his or her deadline.  I could clean up sloppy copy much faster than I could turn out something that didn’t need editing.

Sometimes an impending newspaper deadline made me buckle down and write something that I would cheerfully have given up on under any other circumstances. Once I had to review a local production of Samuel Beckett’s play Happy Days.  The acting was fine, but I had no idea what the play was about — and this was before the digital age, when an hour or so online would have given me enough background to BS semi-intelligently about Beckett.

So in desperation I transcribed and embellished the notes I’d taken during the play, which were sort of a stream-of-consciousness attempt to make sense of what I was seeing. Then I knocked them into paragraphs and called it a review. After the review appeared in print, the actress who’d played Winnie told me that she thought I really “got” what the play was about. Go figure. Maybe the desperation born of deadlines can make you smarter than you think you are.

For me the biggest challenge is having no deadline at all. Projects without deadlines tend to get pushed down the priority list again and again. How to keep going when your own enthusiasm flags or you hit a roadblock that you can’t see around?

No one’s waiting for my novel in progress, but two mini-deadlines keep me going. One is to write “every damn day.” (That blog post is about what happened when I let work deadlines take too much precedence over my own writing. It wasn’t pretty, but I know what to do when I get into that kind of trouble.) The other is my writers’ group, the Sunday Writers, which meets (you guessed it) every Sunday evening. All of us bring pages to nearly every meeting, and many’s the time that deadline has made me keep writing or revising till I had something coherent enough to bring to group.

One thought on “D Is for Deadline”