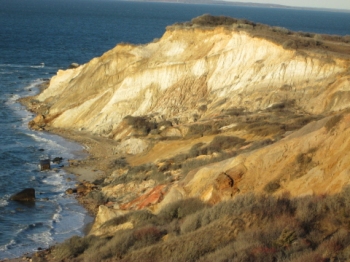 This is what I see when I think “point of view”: a vantage point from which you can see a lot but there’s a lot you don’t know. These are the Gay Head Cliffs, where a crucial scene takes place late in my novel in progress.

I settled on point of view (POV) because it’s playing a significant role in Wolfie, my novel in progress. Wolfie has two POV characters: Shannon, an artist and graphic designer in her 50s; and Glory, an artistically gifted sixth-grader who loves dogs. I’m writing both in what’s called a limited or close third-person POV, meaning that each character’s scenes are shown through her eyes and first-person pronouns appear only in dialogue.

In omniscient third-person the usually disembodied narrator knows everything, including what’s going on in people’s heads. A couple of times while in Shannon’s head I’ve caught myself writing something that boils down to “Little did she know . . .” This suggests either some form of omniscience or that Shannon is looking back at these particular events from some point in the future.

In a previous draft I started to write Shannon’s first chapter as if she already knew what was going to happen, or at least most of it, but this didn’t ring true to me so I jettisoned this approach. In the novel, Shannon and eventually other characters are feeling their way toward a piece of knowledge — a secret or a mystery, if you will — and because of the nature of that knowledge they can’t afford to be wrong.

“Hindsight is always 20-20,” so the saying goes, and for Shannon to know too much too soon would undercut the uncertainty that is driving the story. The other thing is that I still don’t know how the story ends. If Shannon knows and is holding back on me, I’m going to be pissed.

Only one person knows the secret and he’s not speaking to me, Shannon, or Glory. What Glory knows is buried deep in her subconscious; she has no words for it. Shannon is growing uneasy, but in the absence of clear evidence she fears she is projecting from her own childhood experience and her work as an adult sheltering and advocating for abused women. So without words or clear evidence how do I figure it out and convey it all to my readers?

As it turns out, my two limited-POV characters were giving me clues before I caught on to what they were doing. In giving Glory an aptitude for drawing and an interest in web design, I was cleverer than I knew. Clues appear indirectly in the actions and occasionally words of the characters, but the most direct clues come in the form of images, some created by the characters and some drawn from the story. (For more about where images come from, see my 2014 blog post “Grow Your Images.”)

In writing it so often happens that limitations foster ingenuity. A length limit can impose focus on prose that wants to sprawl. The discipline of rhyme and meter forces the poet to pay attention to the sound and placement of each word, to make each word count. (Prose writers can learn a lot from writing and reading poetry.) And in Wolfie the limitations imposed by the incomplete knowledge of my two POV characters are stretching me as a writer and helping me find new ways to tell a story.

One thought on “P Is for Point of View”